If you’re new to the online dating scene then you need to know which sites are considered to be good and which are flat out scams. The site called Flirt Local is 100% a scam and I’m going to share with you exactly why it is a scam. Trust me, I know everything there is to know about this website. 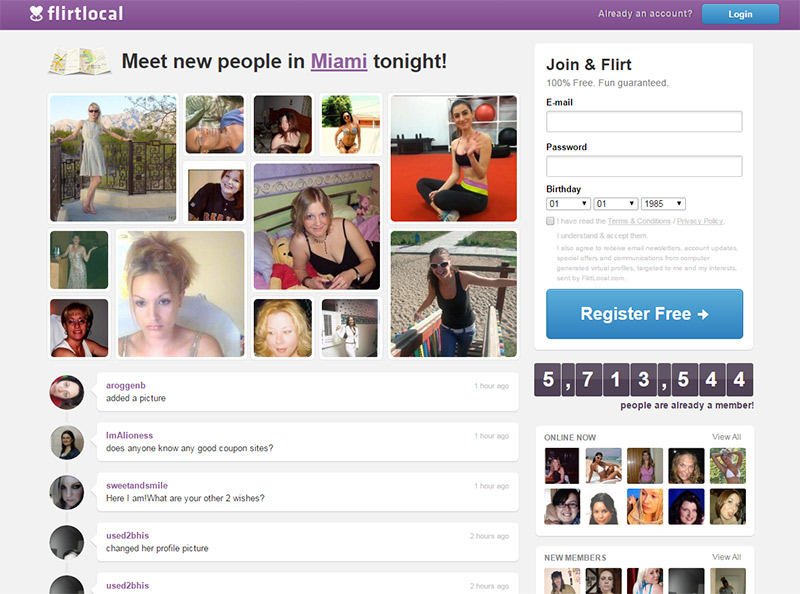 For starters, there are some other dating review sites out there that have also shed some light as to why Flirtlocal.com is considered to be a scam. So, I don’t want you to think that I’m the only one that feels this is truly a scam when in fact it’s a majority vote that led me to write this review of the site. The world needs flirting, heck some people flirt during strenuous CrossFit workouts. However, what we don’t need fake flirting scams.

A lot of the people that claim to have signed up for free as a member have gotten bombarded with hundreds of emails since joining. For starters, if you join the site and start to get 20 girls emailing you right away, it’s a bad sign.

I actually created a half-ass profile on the site and within minutes started getting hit with a ton of emails. That’s pretty impossible given that I didn’t even put up a good looking picture. From my experience and others that have used the site, the emails that were being sent may have been coming from fake women.

Another thing that was a bit of a red flag to me was the fact that literally, every single girl on Flirt Local was a 9 out of 10 on the hot scale. Looking into this deeper, I thought to myself and quickly came to the conclusion that ugly girls like to fuck too.

Dating sites can’t have only hot people since beauty is in the eye of the beholder. That said, I thought it was a bit suspect when I only saw supermodel type girls as members. That’s not real life dating. If it sounds like it’s too good to be true then that’s most likely the case.

I also read somewhere that this site was one of the many that create fake dating profiles. They supposedly do this in order to lure more men into joining the site.

Here’s one thing that really pissed me off big time. I’m not the only one that this has happened to either. The fake messaging is absolutely insane. Flirt Local has been known to send out hundreds of emails to those that join and all with the kicker of not being able to reply to any of them until you’ve upgraded your membership.

They require you to pay $29.95 in order to communicate with the members. If you think that’s a lot, they actually have other memberships that require you to pay a whole lot more than $29.95 per month. Now, I’m all for paying for a membership on a dating site that works, but Flirtlocal.com is a scam.

Here’s a snapshot of their terms on the site…

If you read the terms and conditions of flirtlocal.com, you’ll quickly understand exactly what they do and how they operate. This is their way of safely avoiding getting sued or having to refund your money. They explain in detail what they do and how they create fake profiles, send auto messages and everything else. All of their antics are listed in the terms and unfortunately, most people don’t bother reading them.

You’ll notice that the corporation is based in Guernsey, which makes it that much more difficult to obtain a refund. Lots of corporations will register their company in Guernsey for tax purposes or in avoidance of having to pay taxes.

In addition to that, it makes it very difficult to recoup your money when the transaction is not in the United States. In this specific case, it most definitely is not.

If you’re interested, feel free to watch this video review of this so-called dating site. Take the 5 minutes to watch it before you go to register here.

Here’s all the information that I have on the company that runs the FlirtLocal scam. Or at least that’s my personal opinion of it.

According to Ripoffreport.com, there are complaints of people paying for other sites owned by HK International Limited without the ability to obtain any refunds.

As I said, don’t be afraid to take a look around the internet and read some of the other reviews of Flirtlocal.com. I can almost guarantee that you’re going to run into the same nonsense that I’m reporting here today.

I certainly wouldn’t be caught dead using this site and I’m going to do everything within my power to ensure that someone else doesn’t fall for this flirt local scam. Sure, some may not look at this as a scam but I certainly do.

If you have an issue with this Flirt Local, don’t be afraid to report them to BBB.org and definitely file some sort of complaint. Let them know that you were taken advantage of and if you tried to get your money back but you were unsuccessful, let them know that as well.

I went a step further to share some of the results that I’m seeing on the web for this site. Here’s more proof that websites are saying it’s a total scam.

Conclusion: The Flirt Local Site Is Bad, Nothing More To Say

I think I speak for the rest of the people that joined this site when I say, the flirt local website is a total scam. Regardless of whether or not they disclose information to you, it’s not enough to feel okay about using the site to meet someone to date or hook up.

Anyway, if you’ve joined this site and you want to cancel, I’d suggest that you email them at support@flirtlocal.com. I suggest you cancel your membership to this site immediately and join one that will actually get you laid.

So, what is good then you ask? Well, you’ve got LOTS of options, but I’d say start with this local fling app built for flirting. that’s going to work for you I 100% guarantee it.