Some dating sites and apps are better than others. Here at Adultdatingapps.com, we cover any and all in between. That said, we often come across some micro-niche networks. The League is one of those networks. Below you will find a quick, clear, and concise rundown of the platform. Pay close attention and learn whether this is the network for you or not. First, I’ll confirm that it’s not strictly for hooking up and occasional flings. Many people want something more serious here. At any rate, here’s what you need to know about the network…

Review of The League Dating

The League is a bit different than the other sites here, in that it attempts to take a thoughtful, intellectual approach to online dating. They claim that everyone should be picky when looking for a romantic partner, which is a motto we can definitely get behind. Not everyone is keen on finding a match that has 6 roommates, doesn’t own a car, and is usually broke. Unfortunately, when you’re in your twenties that can be a fair amount of the dating pool. 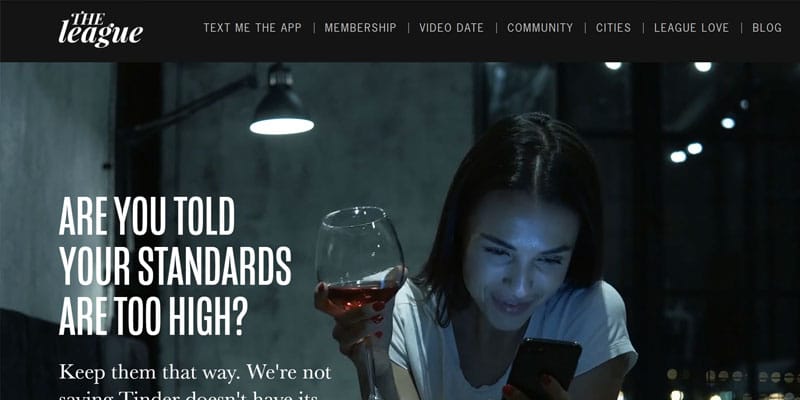 But The League goes way beyond these facts, catering to the truly particular among us. Say for example you’re just unwilling to date someone under 6’2″ who makes less than $75,000 a year and adheres to a strict vegan diet, is a staunch Christian. The League has you covered. Nothing is off-limits, and no detailed specification is taboo.

Unfortunately, the very same thing that makes The League so attractive can sometimes be it’s biggest weakness: specificity. While there’s plenty of individuals on the app who’re nothing more than well-natured folks with particular tastes, there’s also plenty of “frat boys.”

You know the type, men who spew misogyny at every turn, with statements like “I could never love a woman with an A cup” or “A woman should know her place,” etc. While not a site ruiner, this facet might make The League a bit more of a boy’s club than would be expected.

While most of the features offered by The League are seen on other dating apps of it’s kind, the app’s Waitlist is not. This is only partially a feature offered to keep membership “elite”, as it also acts as a price barrier. Indeed, you can skip the waitlist by paying $350 to join automatically.

Is The League’s Cost Worth It?

While this is an absurd price point for the average individual, for high-end working professionals it might just be a drop in the bucket. And seeing as there’s not a lick of third-party advertising seen anywhere on the app, it makes sense that they need to make money via membership.

Attached to a paid membership are member endorsements, where users who’ve already been accepted can suggest new members who are either still waiting or haven’t even applied yet. In true elitist fashion, these recommendations can impact your standing on the site, if the people you’ve suggested aren’t seen as “popular” via page views.

While certainly not for everyone, The League packs in a ton of features not seen on other dating sites, including “happy hour” matches & a “concierge,” which is basically a personalized troubleshooting assistant. When coupled with the high-quality membership base & complete lack of spam or advertising, The League offers a lot of reasons to give it a shot.